The entrance to TextileContext Studio, located on Granville Island in Vancouver, BC. (Jean Kares photo.)

TextileContext Studio has been my workplace and gallery for more than twenty years.  It is located on Granville Island, a cultural destination since the 1970s in Vancouver, BC.  Granville Island is known for its vibrant mix of a public market, nonprofit organizations, restaurants, theatres, unique shops, galleries, numerous artists’ studios, and Emily Carr University (a school of art and design), as well as some remaining light industry and a cement plant (more on Granville Island below).  In this space I make and display my large wall artworks, which incorporate multiple textile media and processes, as well as my smaller collage works where I combine fabric, paper, stitching, and ephemera.  As a visual artist I am primarily concerned with “surface design,” where I alter the surface of the fabric through many techniques that include dyeing, printing, and stitching.  I’m intrigued by pattern and I sometimes incorporate imagery and references from mythology or spirituality into my art.  I currently share the space with Ann Uusoja, a jewelry designer who creates ethnically inspired pieces from stones and beads sourced from all over the world.  She also paints and dyes silk, primarily for scarves. 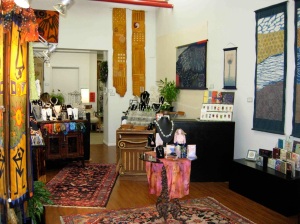 The gallery area of TextileContext Studio in 2011, with a view of artwork by Jean Kares on the right. (Jean Kares photo.)

I formerly shared a studio in the Dominion Building, a heritage site in the older part of Vancouver, with Louise Slobodan, who used her original, hand screen printed fabric and quilt construction methods to create wall pieces.  In the late 1980s we wanted a new studio location that was closer to our homes, and one that also offered a public presence for our art.

We entered into an agreement in 1990 to join our colleague Pat Cairns, a textile artist and one of the original tenants of Granville Island.  Like Louise, Pat also employed quiltmaking techniques for piecing fabric, but was primarily concerned with the movement of colour across the surface, and often based her designs on half square triangles.  She sometimes made use of traditional

quilt patterns, but even within an established format the way she used colour and shape resulted in what I would describe as a faceted effect, where definite lines or shapes dissolved and reappeared elsewhere.  Her work was contemporary and dynamic.  Pat’s studio included a bookstore that specialized in textile art and techniques, and was something of a hangout for the community of textile artists in Vancouver.  The three of us had already been friends for years and had great respect each other’s work, and the new arrangement proved to be stimulating as well as fun.  In those days, rent was lower and exhibition opportunities more frequent, and the studio was almost exclusively a working rather than a retail space. 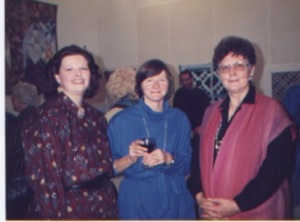 Jean Kares, Louise Slobodan, and Pat Cairns celebrate the opening of their shared studio in 1990. Works by Pat Cairns are seen in the background.

After a number of years our threesome changed when Louise moved to Nanaimo, BC, and was dissolved when Pat passed away in 1996.  I continued in the studio, first on my own and then with a series of studio partners.  Over time the retail aspect of the studio has gained in space and importance, with the need to make sales in order to offset constantly rising costs.  I have a (messy) worktable towards the rear of the public space where I design and work on small projects, and a good sized printing table and dye area in the back.  “Creative minds are rarely tidy” is a truism when it comes to my workspace, and happily, the layout of the studio means we only worry about keeping the front room presentable to visitors!

Granville Island was originally a sandbar in what is now named False Creek.  The Squamish people used the site as a winter village, and through the 1800s it remained undeveloped.  With the influx of white settlers, in the late 1800s the area was filled in as a location for heavy industry.  At its height in the 1930s, 12oo workers were employed on “Industrial Island” making products for the logging, shipping, and mining industries.  After World War II the need for these industrial products declined, warehouses were abandoned, and industries relocated away from this urban setting.  Redevelopment in the 1970s arose from a vision to make the site a cultural destination that would attract visitors throughout the year.  For more information about Granville Island and its history, visit www.granvilleislandworks.com.